That worked for smaller systems that didn’t need a theming layer and weren’t undergoing frequent redesign. But if you needed a large-scale redesign, this was a painful approach.

Invented by @jina for the Salesforce Lightning Design System, design tokens are an approach to storing style attributes like color, typography, and spacing in a pre-determined structure. They are an alternative to directly hard-coding style data that allow designers and developers to build consistent, pleasing layouts, quickly accomplish redesigns, and add a theming layer to their applications. 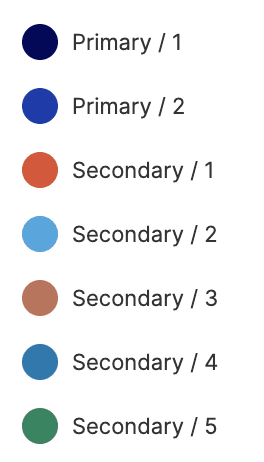 They have specific, generic names. If you changed the value assigned to primary1, it still makes sense!

Those tokens can then be read by whatever styling mechanism we’re leveraging. For example, they could be consumed by styled-components.

Sites without design tokens have hard-coded style data. There is no central location where style data is stored and managed.

In my experience, this is the most common level of design token usage. There is a central location where style data is stored and managed, but the data isn’t organized or named in a consistent way.

A site’s color palette is primarily blue. If a designer is working in a tool that doesn’t support a shared color library, (like Sketch), if they want they need to update each instance of the color blue in all of their files

It’s probably not much better on the code side. A developer will have to look in look through every individual design file that indicates where that color has been changed to orange, and replace the hardcoded blue with orange across the site.

Then, there’s the scenario in which design tokens are leveraged, but tokens are named according to the originally-assigned value.

In this case, a developer can change babyBlue to orange.

But now in the codebase, we’re using the token babyBlue to represent orange, which is really confusing! So a developer really needs to also change the name of the design token, which kind of defeats the purpose.

A designer is using a tool that supports shared color libraries like Figma. If they want primary1 to be orange instead of blue, all they need to do is change the hex code of primary, and all of their designs will automatically update with the new color.

In the code, the design tokens look like this:

In this case, all the developer needs to do is change primary1 to orange and the whole codebase will automatically update in the right places with orange instead of blue.

Among other benefits, design tokens introduce a common vocabulary that designers and developers can both use when referring to styles, which improves collaboration and reduces back-and-forth, saving time and money.

Designers have static mocks that have to be updated by hand everywhere. They might not even know what colors are in the codebase. On the code side, it’s hard to audit what colors are part of the site, and whether they match the designs. Everyone resorts to guessing, which causes a lack of UI consistency.

The design tokens are named differently by the designers and the developers. The designers call the blue blue1 while the developers call it babyBlue. It’s hard to communicate about what needs to be changed. Eventually, they figure it out.

Designers and developers both call the blue primary1. Now, when designers want to update a color in their mocks across the whole site, all they need to do is tell a developer to update primary1 from blue to orange.

As far as I know, it’s not possible.

If your tokens have names like babyBlue, it’s going to get weird when babyBlue is red.

This will be really straightforward, as long as all of the themes follow the rules of the design tokens.

Having hard-coded values across the site makes it nearly impossible to maintain consistency. There’s no way to constrain the number of styles, and there’s no shared language between designers and developers.

This is much better than not having design tokens! At least developers have a good sense of how many different styles they are applying, and an audit is pretty easy.

This is ideal, since the structure of the design tokens can be shared between developers and designers, and site redesigns will be straightforward and consistent.

As companies grow, they start to maintain multiple applications at once. A company can begin to address some of the pain points that develop when this starts to happening by agreeing on a shared design token specification.

Agreeing on a shared specification will open a company up to a number of benefits:

Brent Jackson is working on an open source shared style specification called Theme UI that aims to solve this problem across companies.

If you liked this post, please consider sharing it!