This post is part of an ongoing series about the problems you’ll need to solve before you start building a component library. 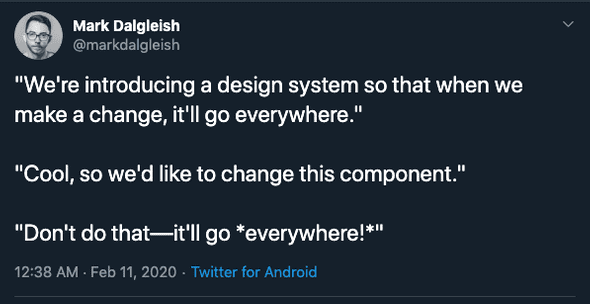 That’s when a second tweet popped up that read:

“We’re going to put it in a monorepo so you can’t even version things!”

It sounds like people have heard incorrect information about monorepos! I was surprised to hear someone say that you can’t version packages in a monorepo.

If you’re sitting there wondering what a monorepo is, go read this post.

When you modify a package, you need to signal to its consumers that you’ve made changes. You normally do this by incrementing the version number of your package. Most open-source JavaScript and TypeScript libraries use Semantic Versioning to express the different types of changes a maintainer has made to a package.

I’ve written about this topic elsewhere, so I’m not going to spend a lot of time reexplaining it. If you’d like to know more, I’d recommend reading Before You Build A Component Library: Versioning before continuing.

As an aside, you might feel tempted to write your own scripts to manage your monorepo. I would caution you against this impulse — you have enough work on your plate trying to set up a component library! You don’t need to reinvent the wheel here.

If your monorepo only consists of components and they are often or always used together, fixed versioning should work nicely for your needs. On the other hand, if your monorepo contains unrelated packages, you might prefer independent versioning. You probably don’t want to increment the version of your A/B testing tool just because you made changes to the <Card /> component.

Imagine that you’re working on a project that involves UI components, TypeScript libraries, and starter kits. After doing some research you decide to use a monorepo. You choose a monorepo for a couple of reasons: you want to make sure that it’s easy for your teammates to find what they need, you want to easily coordinate changes across modules, and you’d like to maintain a single lint, build, test, and release process.

We might as well create a directory called /packages while we’re at it!

The packages key describes where all of your libraries will live. It’s pretty common in monorepos to see them under a /packages folder, so that’s what we have here.

This way you’ll be able to call yarn bootstrap and yarn publish later.

You know that not all of these packages will rely on each other. You don’t want to increment each package’s version every time you make a change in any individual package. It seems like the best approach for this particular project is to use Lerna’s independent versioning.

Let’s create a package that we can test our configuration on. Create a new directory called button under /packages. Inside of the button directory, create a new package.json file and paste:

You’ll have to name the package some randomly generated words, since npm definitely already has a package on it called button. I called mine functionnuclearscholarbroadcast!

For this step, you’ll have to create an npm account if you don’t already have one.

If you run yarn publish, you should be able to increment the package’s version as well as publish it to npm.

I send articles about working as a software engineer, tips and tricks about React and building component libraries, and the occasional personal post. You can unsubscribe at any time.