If you’d rather watch than read, check out In the file: Creating multi-brand design systems.

Everyone wants to talk about multi-brand design systems lately. And no wonder! Companies like Figma and Framer X are working hard to improve designer/developer collaboration. React, Angular, and Vue (which are all component-based) are the most popular frontend JavaScript frameworks right now. And Material Design––Google’s design system––is 6 years old!

When I first started researching multi-brand design systems, there were hardly any resources to draw from. Lots of companies had component libraries, but they mostly supported monolithic brands like Google or Atlassian.

It really hit me how many companies are trying to solve this problem while I was participating in a Figma panel last Tuesday. I glanced down at the number of people in the audience; 505 people wanted to better understand how to build a design system that would work across multiple brands. I was shocked!

I figured that the audience members would be looking for a solution to specific problems they were facing in their own jobs. But I don’t think that there is a one-size-fits-all solution to the multi-brand design system problem. The solution that works for a specific company depends on a number of factors, including how flexible the brands need to be, how much money is available to invest in the design system, and how willing the team’s peers are to adopt the system.

I realized I couldn’t tell the audience what I thought they really wanted to hear. But I could share the core concept that we constantly return to as we think through how to structure our design system: progressive disclosure of complexity.

Progressive disclosure is a design term that describes when a designer “defers advanced or rarely used features to a secondary screen, making applications easier to learn and less error-prone*.”

When a user first comes to your website, you don’t want to show them every single setting they could possible toggle. That would be really complicated and confusing, and your user would probably leave feeling frustrated! Instead, you want to show them the most common functions they should be able to perform with your site. Then, as the user becomes more advanced, you should let them discover more advanced functionality and behaviors.

My main takeaway from his blog post is that you should allow your users to trade complexity for flexibility.

Let’s step back and think about what it means to trade complexity for flexibility for a moment.

When we think about building a design system, we want to provide our users with sane defaults that they can opt-out of when they need more advanced features. When users feel like they need more flexibility, they should be able to drop down into a lower level of abstraction instead of ejecting out of the system.

On the Forge team at Harry’s, we organize our system into four different layers of abstraction. All work takes place on a spectrum from least complex / least flexible to most complex / most flexible.

For this to make sense, I need to define some terms for you:

Base components are the smallest possible building block of a site. These are elements like buttons, links, and cards. They can be composed together to build higher levels of abstraction. 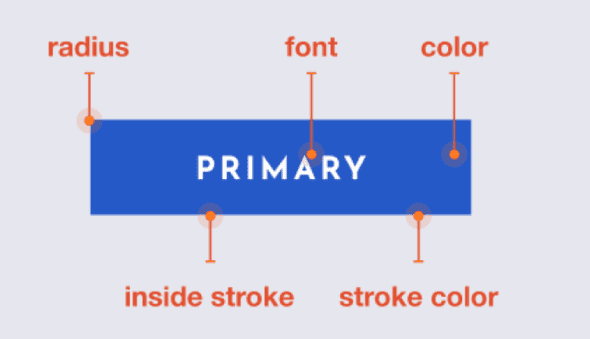 Layout components are built out of two or more base components.

In the example above, the layout component consists of two base components, a quantity selector and a button. We might call this component something like AddToCard />.

Starter kits are design files and cloneable sites that are composed of many layout components. A page in a starter kit might look like this:

A team that was happy with the defaults set by the starter kit would opt into this layer if they did not want to spend a lot of time, effort, or money customizing a site further.

Let’s say that a product manager realizes that users aren’t adding as many items to the cart as they would like. They might decide to rearrange the layout components on the product display page to A/B test a new experience.

Most Complex / Most Flexible 🚴‍♀️

Ultimately, a product manager is allowed to rewrite the whole PDP from scratch if they feel that’s appropriate. But even if the whole PDP is custom, the team still doesn’t need to leave the system––they can still leverage the cart and checkout from the starter kit at the “least complex / least flexible” level while opting into the “most complex / most flexible” level on the PDP.

Reach out to me

I hope this was a helpful explanation of progressive disclosure of complexity! Feel free to reach out to me on Twitter if you have any questions or suggestions about this post.

* This definition comes from the Norman Nielsen Group.

If you like what you're reading, I send out a newsletter whenever I publish a new post. You can always unsubscribe.